Local consumer affairs centers across Japan have received inquiries and complaints about billing fraud. The inquirers received an envelope stamped "important" enclosing a letter titled "Final notice of lawsuit". The letter said, "Due to contractual default, your background check has been started and a written complaint has been submitted. Please call the following number." The letter also showed the final deadline for dismissing the case. The addresser was unfamiliar to the inquirers. They were wondering whether or not they should ignore it, suspecting the sender.

The letter included addressee's postal address, name, and mobile phone number, and said, "We would like to inform that your mobile phone company or the operating company thereof has submitted a civil complaint against you over contractual default and that your background check has been started. The lawsuit will be launched after the final deadline for dismissing the case." The letter advised addressees to call a fixed-line phone number to consult about abandonment of the case.

The letter stressed that addressees should call in person, stating like "We are sending this notice in writing. In order to protect your privacy, please contact us by yourself." Under the formal court procedure, however, a court complaint in a sealed envelope with the court's name is directly handed to the person concerned in principle, and is not put in a mailbox.

Some consumers contacted the sender and were charged money in the name of an investigation fee, a late fee, a notary document fee, etc.

If you feel uneasy even slightly, consult your local consumer affairs center.

The following web pages are written in Japanese.

News in the past

Photo 1. Example of an envelope 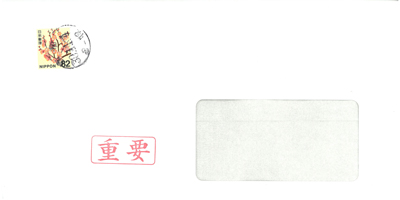 Photo 2. Example of a letter