HOME > NEWS&TOPICS > News > Caution! Child may fall from diaper changing table! Risk of head injury is high and hospital stay may be required

Caution! Child may fall from diaper changing table! Risk of head injury is high and hospital stay may be required

The Medical Facilities Network3 received 58 accident reports4 in about 9 years since December 2010 that children fell from diaper changing tables in public spaces (data registered through December 31, 2019). Among the 58 cases, cases of head injuries amounted to 41 cases (71%), 8 cases of which required hospital stay.

NCAC has analyzed the accident reports received by the Medical Facilities Network and has conducted an online questionnaire survey to find out how the products are used. Based on the findings, NCAC would like to share information on this issue and urge relevant organizations to take measures.

Summary of the accident reports from the Medical Facilities Network

NCAC has conducted an online questionnaire survey among 1,000 consumers having children aged 3 years or younger and experience of using diaper changing tables in public spaces while on the go.

Things or surroundings that respondents would like to have for convenience or safety (n=1,000)

Request to the government

It has been reported that some children fell from diaper changing tables. Therefore, NCAC would like to request the followings. 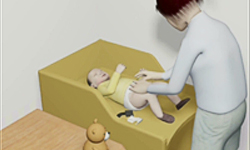 Video: Be careful for children not to fall from diaper changing tables!
provided by the National Institute of Advanced Industrial Science and Technology