HOME > NEWS&TOPICS > News > Beware of accidents when playing with a float in the sea!

Beware of accidents when playing with a float in the sea!

During summer vacation, many people go swimming in the sea. There are several types of swimming floating tools for children: swimming rings, floats and others. Of these, floats are most strongly affected by wind.

According to the Japan Coast Guard, water accidents reported in 2018 include some cases where a child riding on a float was drifted offshore by wind from land. One of the victims was a four-year old child who drowned and suffered from a moderate disease.

Once a child riding on a float is drifted away, it is difficult for the child alone to return to the original place. It's very dangerous and fatal if the child is not found soon.

When a child plays with a float in the sea, caregivers should remember the following. 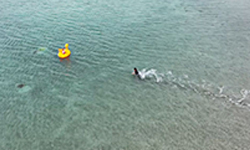 Video. Beware of accidents when playing with a float in the sea!