HOME > NEWS&TOPICS > News > Capsule sponge toy entered the body of a small child! After suffering from unexplained symptoms for 4 months, the girl had the object removed with general anesthesia.

Capsule sponge toy entered the body of a small child! After suffering from unexplained symptoms for 4 months, the girl had the object removed with general anesthesia.

At the request of the Consumer Affairs Agency, the National Consumer Affairs Center of Japan (hereinafter called "NCAC") investigated some capsule sponge toys on the market to identify characteristics of the toys.

A capsule sponge toy (hereinafter called "the toy") consists of an outer capsule made of gelatin and a compressed sponge toy inside. When soaked in warm water, the gelatin capsule melts and the sponge toy expands to its original shape (e.g. dinosaur, fruit, animal).

In December 2018, a local consumer affairs center submitted a notice on the toys to the Consumer Affairs Agency to report a serious harmful accident based on the Consumer Safety Act (Act No.50 of June 5, 2009).

While taking a bath, a capsule sponge toy entered the vagina of a four-year-old girl. Parents didn't notice the accident. The girl suffered from symptoms for some time. The cause of her symptoms was found by medical exploration about 4 months later. She had to wait another month to undergo surgery to remove the object.

So far the Consumer Affairs Agency received only one report on accidental entrance of the toy into the body. On the other hand, small children could accidentally swallow the toys, which may lead to pulmonary aspiration (entry of material such as food into the respiratory tract) or suffocation. 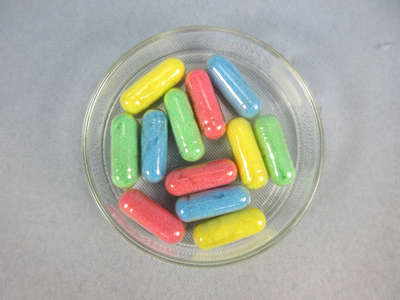 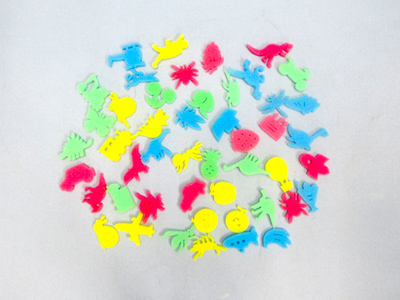 When soaked in water, the gelatin capsules melt and the sponge toys expand to their original shape.
The approximate size is 32-33 mm × 42 mm × 6-8 mm, while it slightly varies depending on shapes.

Results of investigating the toys on the market

In order to prevent entrance of the toys into the body, pulmonary aspiration and suffocation, note the following points.