Troubles associated with toppling of water heater's hot water tanks were also reported after the Great East Japan Earthquake. NCAC issued an alert to consumers and made a request to businesses concerned at that time. Based on the previous instance, the Ministry of Land, Infrastructure, Transport and Tourism partly revised a "Public Notice specifying the safe load bearing structure method for building equipment" to clarify criteria for taking measures to prevent building equipment from toppling. Nevertheless, numerous hot water tanks toppled in the Kumamoto Earthquake, probably due to poor installation.

Diagram 1: Number of years from installation

How to install a hot water tank

Diagram 2: Visualization of how to install a hot water tank with anchor bolts

A water heater's hot water tank is stabilized with anchor bolts which are specified depending on the installation site, the position to be anchored, and the maximum water volume of the tank.

In order to stabilize legs of the hot water tank, anchor bolts are embedded in the foundation. Each anchor bolt is inserted in a hole drilled in the foundation. When the core rod head is hammered down, sleeves below unfold and dig into the foundation. Then, each leg of the tank is hooked on the bolt head and tightened with a nut to provide stability. Anchor bolts are divided into several categories according to screw diameter, such as M10 (about 10 mm) and M12 (about 12 mm). Each of these categories has variety of lengths. Depending on the installation site, the upper part of the hot water tank may be bolted to wall.

It is used for bolting the upper part of the hot water tank to wall or other structure.

About 80% of the inquiries of toppled hot water tanks are associated with poor installation. Specifically, inquirers complained that anchor bolts did not meet requirements written on installation instructions in terms of size, the number of bolts, and the way of securing to the foundation.

(1) Installation instructions were not followed.

(2) Poor installation is likely to be overlooked.

A hot water tank can stand by itself, and its legs are covered over. Therefore, poor installation is hardly found by appearance before the tank topples due to a big earthquake or other force.

(3) Sometimes it is unclear who is responsible for installation.

(4) Lessons learnt from the Great East Japan Earthquake were not utilized.

In light of the numerous hot water tanks toppled in the Great East Japan Earthquake, NCAC, relevant ministries and industry associations took preventive measures, such as issuing an alert to consumers, revising a public notice, raising awareness among businesses, etc. As a result of these actions, sellers and installers of water heaters probably had opportunities to get information on hot water tanks toppled in the earthquake, at least after September 2011.

According to the data, it appears that the proper installation method without safety problems is yet to be spread and conducted across Japan and that lessons learnt from the Great East Japan Earthquake were scarcely utilized.

(1) If a water heater has been already installed

(2) If a water heater will be installed

Even if you haven't encountered trouble, consult your local consumer center if you have any unclear questions. 3

NCAC already issued a request to industry associations on July 21, 2011. In light of the ensuing revision of the public notice and consultation cases related to the Kumamoto Earthquake, NCAC further requests them to take the following actions.

(2) To sellers and installers

Example of a hot water tank toppled in the Kumamoto Earthquake 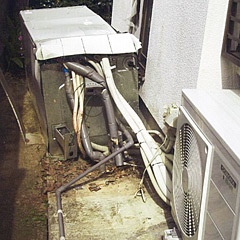