HOME > CASES&JUDGMENTS > Consultation Cases > When ironing clothes on an ironing board, its legs were suddenly folded. The iron fell down and burned user's calf.

When ironing clothes on an ironing board, its legs were suddenly folded. The iron fell down and burned user's calf.

Ironing board legs were suddenly folded and the iron fell down from the board because some of the screws for leg fastening metal parts were missing or loosely attached. The following shows details of the case.

Details of the inquiry

I was ironing clothes on a brand new ironing board (See Photo 1). When I placed the iron upright on the ironing board on the right side near me, legs of the ironing board were suddenly folded inside. The hot iron fell down from the board and dropped on my right calf. I got burned on the iron. I turned over the ironing board to observe its reverse side. Each leg seemed to be fastened to the board with a metal part and four screws, but I found that two out of the four screws for one leg were missing. When I contacted the manufacturer and told that I got burned due to the accident, the manufacturer told me that they would pay for my medical treatment.

At a later date, I received a report from the manufacturer, which stated "We investigated why the ironing board legs had been suddenly folded, and conducted a simulation test under the same conditions 200 times. Based on the results, we have concluded that there is no causal relation between the product and the burn injury. Therefore we are not in a position to pay your treatment cost."

I'm not satisfied with their response. I would like you to investigate why the legs were suddenly folded. Although more than one month has passed since I received medical treatment, my burn has not healed yet. 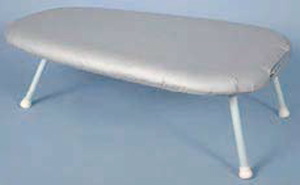 NCAC removed all the screws and metal parts to observe the conditions, and found that the unscrewed holes were threadless and showed no sign of screws being in the holes (See Photo 5).

Photo 2: Reverse side when legs are folded 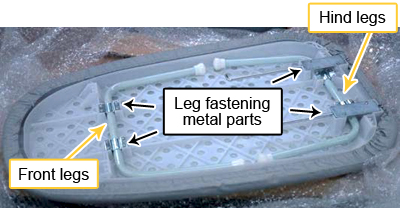 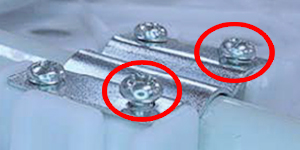 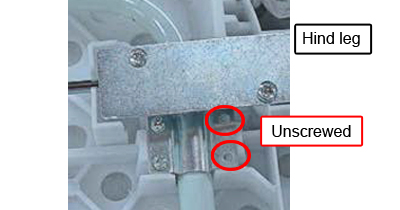 Photo 5: Screw holes (when a metal part and screws are removed) 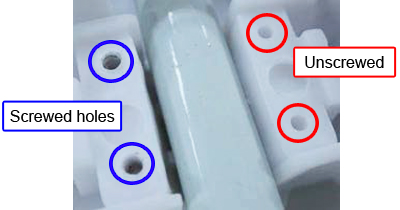 (2) Investigation of the fixed state of legs

NCAC measured the force required for folding legs, using the product under complaint, a same type product, and a reference product (See Photo 6).

Moreover, spread legs of the product under complaint were loosely fixed. When lifting up the board, legs hung down straight under their own weight and became unstable. When the product was placed as it is, sometimes legs were folded without any load and fell down (See Photo 7). 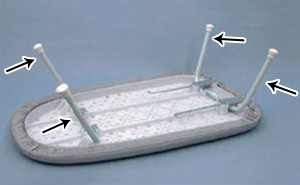 Photo 7-1: Product under complaint placed on a flat surface

Photo 7-2: Product under complaint lifted up

None of the product under complaint, the same type product and the reference product was labeled concerning legs and stability.

The same type product was supplied with a caution label concerning stability, which stated, "Check for damage and wobbliness before use to ensure safety", "When you use the product with legs unfolded, fully unfold legs before use", "Use the product at a flat and stable place", etc.

The reference product was supplied with a caution label concerning stability, which stated, "Check for cracks, damage, wobbliness, and stability of legs before use", "Fully unfold legs and place the product at a flat place to ensure stability before use", etc.

Based on the above, it has been inferred that the ironing board legs were suddenly folded because some of the screws for fixing the leg fastening parts were missing or loosely attached.

At a later date, the manufacturer reported to the center as follows: "We talked with the inquirer and covered the medical treatment cost, which satisfied the inquirer. We inspected all the same type products in our stock and found that all of them were screwed where necessary. We will discontinue manufacturing and selling the products in the near future."