Folding chair legs spread and the seat fell down

When a person was sitting on a folding chair, rivets fixing the metal seat support frame fractured and the chair collapsed. Then, the person landed hard on the backside and the floor was also damaged. It was inferred that the rivets had insufficient strength. The following shows details of the case.

Details of the inquiry

Four years ago, I bought a folding desk and a folding chair in a set. When I was sitting on the folding chair for 30 minutes or so, I suddenly heard sounds like glass breaking when the chair legs fully spread and the chair collapsed. I landed hard on my backside with the seat, and my body was thrown on the floor. I got a strong pain in my bottom.
Observing the broken chair, I found out that rivets on the right and left sides fixing the seat support frame to the pipes had burst. I gathered up and observed the parts. Rivets1 on the right and left sides were disconnected at the hollow portion which had been swaged at the end. The product label attached to the chair did not indicate a withstand load. I would like to request for an investigation to see if there's any safety problem in the product. The wood floor of my rented house was damaged by the impact of the collapsed chair. I want the chair manufacturer to pay the repair cost.

(1) Overview of the product under complaint

The product under complaint had a seat support frame (hereinafter called "frame") riveted to pipes on the right and left sides. The product label attached to the chair did not indicate a withstand load (See Photo 1).

Photo 1: Appearance of the product under complaint
(the seat was temporarily fastened) 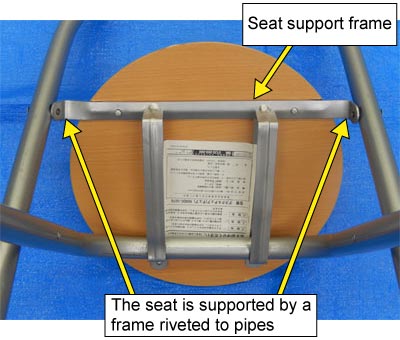 (2) Visual check of the product under complaint

The riveted frame was distorted upward on its left side. The end of each rivet on the right and left sides of the seat was disconnected and the shaft of each rivet was curved. The hollow part of the rivet was positioned at the joint of the frame and the pipe, so it was inferred that a shear load2 had been applied to the hollow part and then the rivet had been broken (See Photo 2 & 3).

Photo 2: Appearance of the rivet of the product under complaint 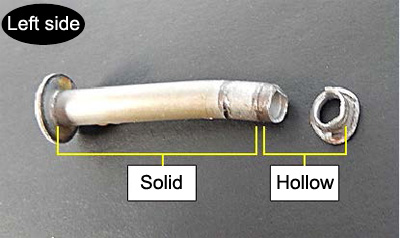 Photo 3: The product under complaint; the frame distorted upward and the rivet curved at the end 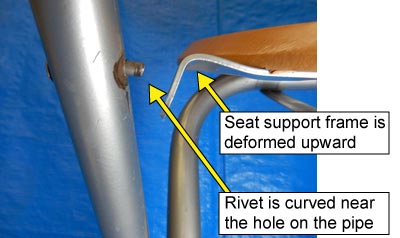 Diagram: Dimensions of the rivet of the product under complaint and of that of the same type product

(5) Load test of the product under complaint

In order to investigate strength of the rivet and of the frame used for the same type product, a load test was conducted, referring to the clause 7.1 Static strength test of seating face3, JIS S1203:1998 "Furniture - Chairs and stools - Determination of strength and durability". Based on the standard, the load 2000N, the maximum load specified in the list of classified tests, was applied 10 times repeatedly at the speed of 2 mm per second. After the load test, the rivets and the frame of the same type product showed little deformation, and the rivets did not fractured.

The center orally conveyed the product test results to the inquirer. The inquirer and the seller discussed the matter and reached a conclusion that the seller would cover the product price, the floor repair cost, and the medical expense.